In January-June 2018, at least 70 human rights violations incident on indigenous peoples both in plain and CHT have been observed. A total of 209 indigenous persons including 12 children and 23 women and girls and 125 families have been subjected to the victims including 74 houses/families have been searched in these 70 incidents. In these 6 months, a series of killing, gang rape, rape, torture, sexual harassment, arbitrary arrest and detention, destruction of property and arbitrary house searching have been witnessed so far. 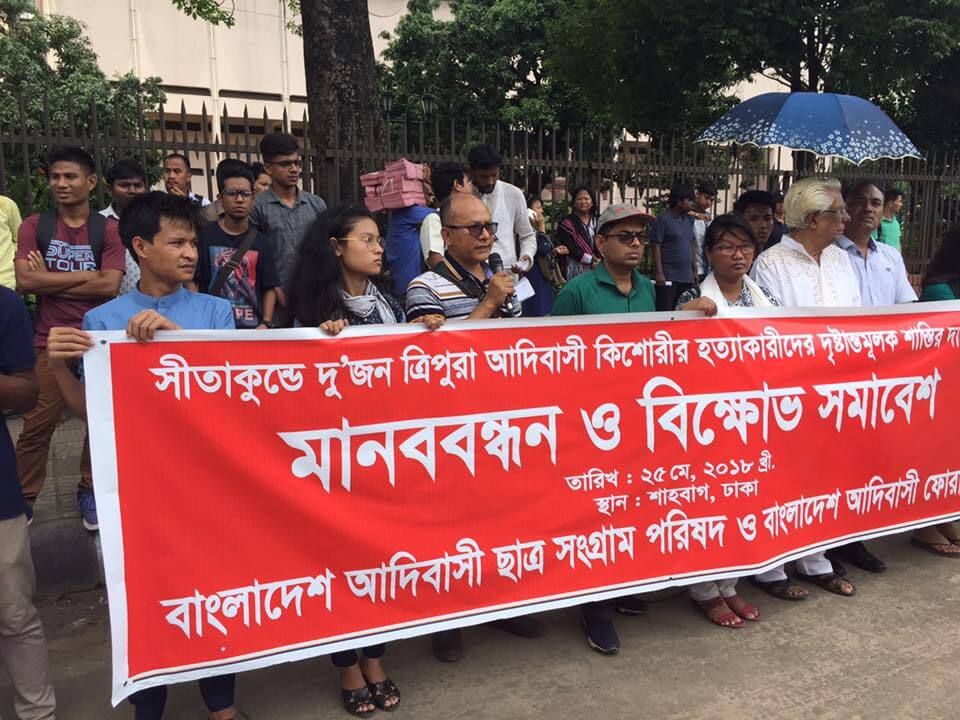 Apart from that a significant number of attack, arbitrary arrest, detention, and house searching on indigenous people have increased over these 6 months. Especially, filing fabricated cases against the indigenous rights activist on allegation of being extortionist, arm miscreants and terrorists, followed by arbitrary arrest, sending to the jail, detention and physical torture in the camps, searching houses, etc. Thus, during these 6 months, 96 persons have been charged in four false cases and among them, 32 persons have been arrested so far. Illegal searching of 74 houses was carried out in the middle of the night without any prior warrant or complainant in CHT. 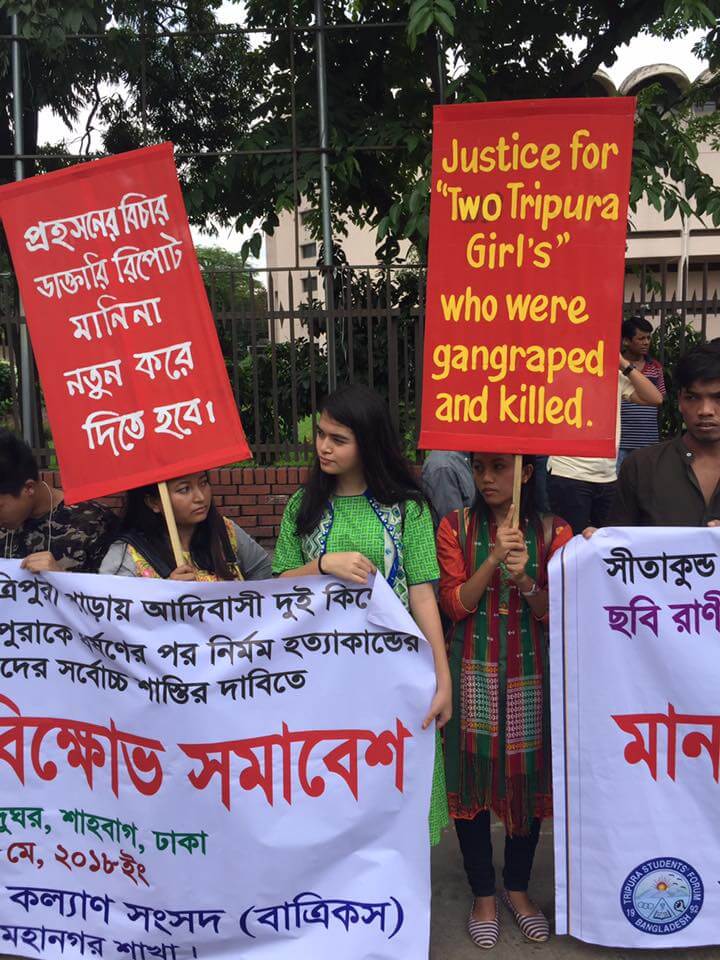 which, 2 were killed after rape and more 4 were killed, 2 was gang-raped, 7 were raped, 5 were attempted to rape and 3 were sexually harassed and assaulted in Bandarban, Chittagong, Khagrachari, Mymensingh, Rangamati and Dhaka. In the month of May alone, two indigenous Tripura girls were brutally killed after rape in Sitakunda upazila of Chittagong district. Besides, Two teenage Tripura girls in two separate incidents were also gang raped in Bandarban and Khagrachari in April and June respectively. The very heart-breaking incident was reportedly the sexual victim of two Marma sisters in Bilaichari upazila under Rangamati district in January. They, along with their parents, are still kept confined with police security at Vedvedi area in Rangamati municipality since January. Kalpana Chakma, Organising Secretary of Hill Women’s Federation, who was kidnaped allegedly by security personnel from her house of Baghaichari under Rangamati district still remains missing for last 22 years. Rights activists demanded unearthing a high-level inquiry into the abduction and disappearance of Kalpana Chakma.

Due to non-resolution of land disputes, land grabbing, eviction, and ethnic conflicts are frequently taking place in CHT and plain lands, which leads to a great trouble of lives and livelihood of indigenous communities. 40 families of indigenous Oraon community are, for example, under threat to eviction in Noahata Mahananakhal Adivashis village of Paba upazila in Rajshahi district. In a press conference on 17 January 2018, indigenous Oraon villagers alleged that police even denied to accept case while indigenous villagers went to police station to file a case. On the other, the illegal land grabbers and Bengali miscreants equipped with firearms threatened the indigenous Chak families of Satgajjai Chak Para under Naikhyongchari Mouza of Naikhyongchari sadar upazila and consequently, the Chak families compelled to abandon their village on 14 February 2018.

It is to be worth mentioned that indigenous families, who became homeless in last year’s arson attack in Longadu upazila of Rangamati, are yet to be rehabilitated. Meanwhile, many of the families of three villages continue to live in rickety makeshift huts. On June 2 June 2017, over 250 homes and shops owned by indigenous people were vandalized, looted and burnt while one indigenous woman was reportedly burnt to death as Bengali settlers unleashed a series of an arson attack on indigenous community at Tintila, Manikjhor and Batyapara villages in Longadu upazila. Longadu arson attack victims formed a human chain in Longadu upazila headquarters of the district on 2 June 2018 demanding exemplary punishment to the culprits who attacked three indigenous villages in the upazila in last year. They were promised rehabilitation and construction of houses by the government, they are still living in makeshift conditions, said the speakers at the programme. 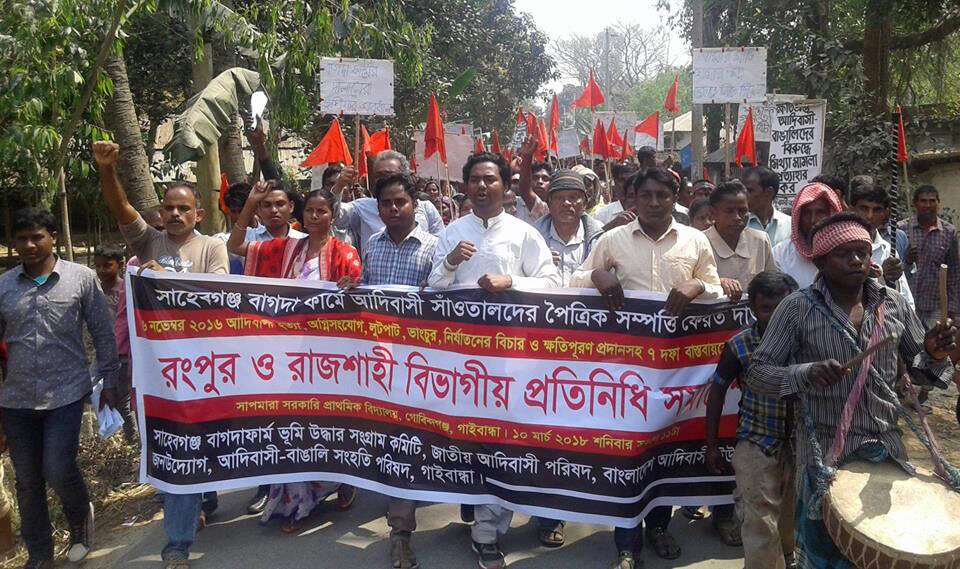 Following the incident of killing of Shaktiman Chakma, Chairman of Naniarchar Upazila Parishad, on 3 May 2018; and killing of 5 persons including Tapan Jyoti Chakma on the way to attending the funeral of Shaktiman Chakma, on 4 May 2018 in Naniarchar upazila of Rangamati hill district, joint forces have started to carry out searching operation in Naniarchar upazila, Rangamati sadar, Longadu and Baghaichari upazilas under Rangamati district. Since then, at least 14 indigenous persons in three hill districts of CHT have been arrested and more 24 have been detained for some hours so far. Many houses have been searched. This created panic and insecurity among indigenous youth and activists. This drive of joint forces continues as part of the criminalization of indigenous activists. The criminalisation of activities of Indigenous Peoples and Indigenous Peoples’ Organisations (IPOs) engaged in the movement for land rights and implementation of the CHT Accord labeling them as terrorists, arm criminals, extortionists, separatists etc.has been intensified alarmingly.