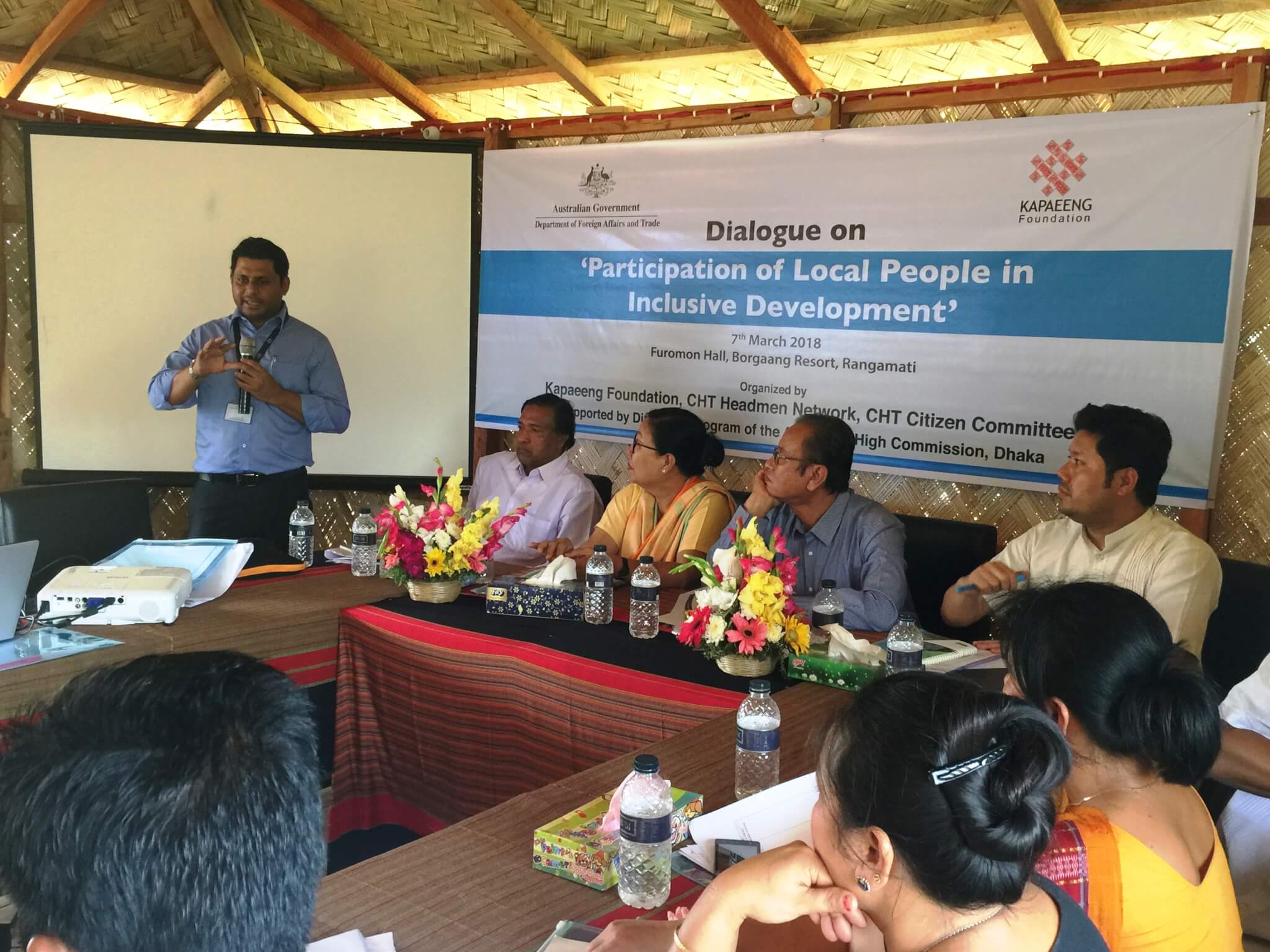 The main focus of the dialogue was to strengthen meaningful participation of the local people in development process. It also highlighted different issues related to indigenous peoples including the hazard of landslides, situation of human rights defenders, participatory engagement of indigenous peoples in decision making level, and capacity building among indigenous women leaders and representatives.

The dialogue offered a platform for more than 32 development workers, civil society members and human rights activists to discuss and exchange their views and ideas about opportunities and challenges of inclusive development in the CHT.

The program commenced with a welcome speech by Mr. Pallab Chakma, Executive Director of Kapaeeng Foundation followed by a keynote presentation by Mr. Ashok Kumar Chakma Executive Director, Moanoghar. The main objectives of the keynote were to provide a general picture of development programs in the CHT region; and to look into the development programs whether they are inclusive or not. In the keynote, Mr. Chakma urged development must be indigneous friendly and systematic. He addressed that the two third of the provisions of CHT Accord have not yet been implemented. Due non-implementation of the Accord, the special administration system composed of the CHT Regional Council and the 3 Hill District Councils has remained largely inactive. Therefore, without full implementation of CHT Accord, peaceful development process in CHT may not be possible. He further addressed that most of the ongoing development programs in CHT are ‘forced’ on people (without proper consultation with the local people) which he considers as an evil act that is politically motivated just to grab lands of the local peoples. Mr. Chakma concluded the keynote presentation by providing a few recommendations. These are-

Pallab Chakma addressed, immediately after signing the CHT Accord in 1997, an opportunity for development sector was open for systematic development intervention in CHT. However, due to not being indigenous friendly, development activities carried out have produced little impact on grassroots communities. The ongoing projects have failed to fulfil the expectation of grassroots people. He emphasized to implement them in consultation with local peoples. Mr. Chakma further said, there is no visible development from the government side for the fringe land area in CHT. Though the government takes many initiatives for the minorities, such plans seldom see lights. Indigenous peoples of Bangladesh are even absent in the country’s SDGs implementation process, he further added. Development is not possible without taking the country’s indigneous people on board.

Mr. Santi Bijoy Chakma addressed, for any kind of development intervention in CHT, we must include the grassroots people. Development organizations must have consultation before any development projects are implemented.

Mr. Arun Kanti Chakma said, there is no security of the life of indigenous peoples. Especially women are the most vulnerable section of the society. Bangladesh Government often treat indigenous peoples in discriminatory manner, he added. Development projects are implemented without any assessment and proper consultation with the local people and public representatives of the region, Mr. Chakma further said. He believes forced development never benefits the grassroots communities. Most development projects in CHT are implemented without following appropriate procedure.

Banchita Chakma addressed, development projects should focus on the poor families who live below the poverty line. However, people friendly development projects are hardly seen in the region. Therefore, she urged to create a mechanism to focus on the grassroots communities in order to bring them under inclusive development process. Furthermore, she emphasized on focusing multilingual pre-primary education system in CHT region. Despite having available books, there is considerable lack of qualified teachers in the region and it is due to lack of a proper plan from the government side.

Mr. Nahil Imam said, the Australian government has a positive interest on the indigenous issues in Bangladesh. Mr. Imam states, through education, indigenous peoples can irradicate any kind of obstacles in the society. On behalf of Austrailian High Commission, he promised to support self-governance and sustainability of the indigenous peoples in CHT. He assured that Australian Government is interested to support development acitivities of indigenous communities of Bangladesh.

Abbash Uddin Chawdhury (Executive Director, PARA) said, it is unfortunate that Bangladesh Army do not consult and engage local people during implementation of any development projects in CHT. Mr. Chowdhury recommended for justifying whether indigenous issues are properly incorporated in the 7th fifth-year plan (2016-20).

Sakahawat Hossain Rubel (President, Press Club, Rangamati) said, 98 percent of the projects by CHT Devleopment Board have been implemented incorretly. He emphasized on prioritizing more on the private sector for the development in CHT.

Himel Chakma (Journalist, Manabkantha), development should not affect the cultural heritage and livelihoods of the indigenous peoples. Development projects should be implemented according to the needs of people.

Following are the recommendation addressed by the participants: